Skip to content
Are Bisexuals Just Greedy? by Fiona Dawson 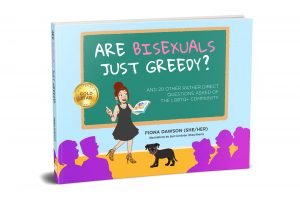 How is gender identity different from sexual orientation? Do our genitals predict our gender? Why is it important to use a person’s correct pronouns? Fiona Dawson answers these questions and more in her candid picture book for people old enough to swear and talk about sex      “Are Bisexuals Just Greedy?” An award-winning director, producer, writer, and public speaker, Dawson has advocated for the LBGTQ+ community for nearly two decades. Relating her personal experiences as a cisgender, gay, and then bisexual woman, she blasts the stereotypes and stigma faced by people who don’t fit neatly in a ‘male’ or ‘female’ category.

For thousands of years, cultures around the world have had a concept of gender and sex as being nonbinary. With humor and wit, Dawson offers a direct and uncomplicated explanation of terms within the LGBTQ+ community for allies, supportive family and friends, or anyone curious to know more about gender and sexuality. She notes that it’s high time we recognize that our identities are fluid and celebrate our authenticity. We all want to express ourselves and we all deserve dignity and respect, no matter how we identify on or off the spectrums of gender, sex, and sexual orientation.

Fiona Dawson
Fiona Dawson is an Emmy® nominated and award winning director, producer, writer, & host. She is a passionate believer in the power of media to educate, entertain and inspire. She volunteered for six and a half months in Bangladesh in 1998 and has been working in some capacity on LGBTQ human rights since arriving in the U.S. in 2000. She was voted Houston’s Female Grand Marshal for the 2009 LGBT Pride Parade, has served on the National Board of Directors of the Human Rights Campaign (HRC) and on the Board of Directors for NJLGA – The Association of LGBTQ Journalists. Fiona came out as bisexual in 2012 and proudly advocates for her community.

Fiona has previously filmed stories in India on sex trafficking, prostitution and HIV/AIDS. She hosted segments for HereTV during the Republican and Democratic conventions, she is published in NBC OUT, Curve magazine, FTM Magazine, The Advocate, The Huffington Post and The New York Times. A British native and American immigrant, Fiona lived in Houston, Texas for 11 ½ years working in the nonprofit sector and later in corporate social responsibility before moving to New York in 2011 to develop her media career.

In October 2012 Fiona started the TransMilitary project, to elevate the stories of active duty transgender service members who were still banned from the U.S. military. Following the success of the short film she directed and produced, “Transgender, at War and in Love” for the New York Times, in 2015 Fiona was honored by The White House as an LGBT Artist Champion of Change. The film won The White House News Photographers Association’s Best Documentary, was nominated for a GLAAD Award in the Outstanding Digital Journalism – Multimedia category, and was a nominee for “Outstanding Short Documentary” in the 37th Annual News & Documentary Emmy® Awards.

The feature length documentary “TransMilitary,” which Fiona co-directed premiered at South by Southwest (SXSW) 2018 and won the Best Feature Documentary Audience Award. Following a string of festival awards, TransMilitary made its TV debut on Viacom’s Logo in 2018 and is now available to stream on a variety of platforms.

In addition to her advocacy through media, Fiona is a professional public speaker and soft-skills trainer. Her experience, personality and on-camera passion make her the ideal host for this show.

Get your copy of Are Bisexuals Just Greedy? at your favorite place to buy books!